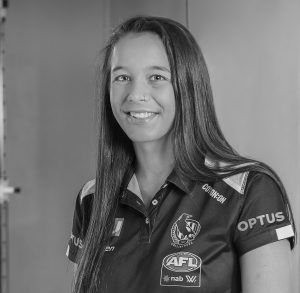 EDUCATION: Studying a Bachelor of of Social Work at Victoria University

Brittany is very mature for such a young age with an impressive footballing history. She’s toured New Zealand as the vice-captain of the Australian AFL High Performance Academy, captained Victoria Metro Youth Girls to a national carnival title in 2015, has been selected for the Youth Girls All-Australian Team three times, at 18 years old played for Melbourne in the 2015 exhibition match and played every AFLW game for Collingwood in 2017.

Brit is currently studying a Bachelor of Social Work at Victoria University and frequently volunteers with Ladder, supporting youth homelessness. She also works with special needs schools around the Melbourne area. In her little spare time Brit enjoys hiking, swimming and going out for brunch with friends and family.

Brit is an elite runner and considers it as one of her biggest strengths. She is a valued member of the Collingwood FC team and is known for her ferocious tackling skills. The rising star midfielder will continue to play for Collingwood in for the 2019 season.